As 2011 arrives so does the opening of new nightlife in San Diego. Clubs and bars alike are anxious to give San Diego the next best thing in new spots, micro brews and familiar places made over with a twist. Here are the top nightlife experiences I am looking forward to in 2011:

From the guys behind On Broadway, Boudoir’s a tri-level concept club centered around the excitement of being in a (very kinky) girl’s bedroom. El congal is complete with handcuff window-blinds, Kama sutra silhouettes and screen-dividers made from real horse-whips ay-ay-ay.  The ground floor houses private booths and a bar backed by a two-story wall designed to look like a massive, semi-mirrored dresser. A top-level private room surrounded by silhouetted forms acting out the Kama Sutra, an actual glass-walled boudoir where you can freely spy on ladies getting ready, ¿que pedo? Let’s not forget the dungeon, er, basement, with a red-lit back bar, two active stripper pole platforms, and a bunch of Roman statues. For the truly brave, Boudoir also has a dominatrix’s lair complete with a spinning wheel o’ bondage. ¡Dios mio! The only downside to this truly unique-for-San Diego concept club is the mediocre location; visit them on the corner of C and 7th or take an online peek to what’s in store for you. 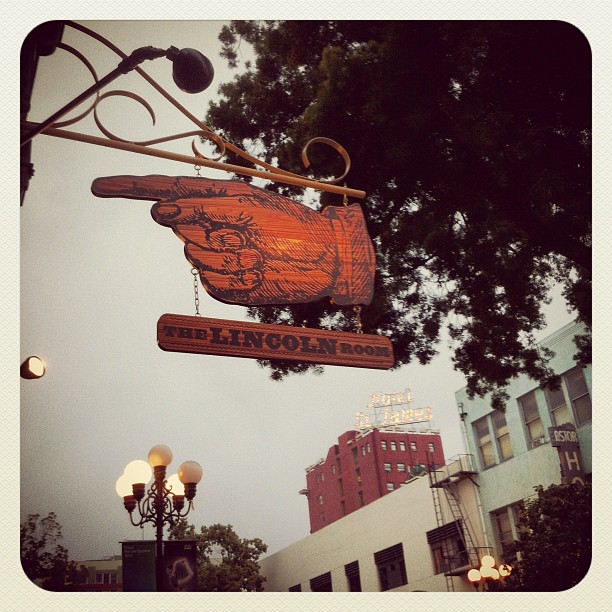 Recently opened by the guys behind Confidential and La Puerta (¿Ya no esta el Confidenshal?). The Lincoln Room is a bi-level resto-lodge, lined with timber trunks that feel like the inside of a Lincoln Log cabin, studded ox-blood booths & chairs, two appropriate bars, and a brick-backed “Presidential Suite”. The menu still includes old faves like ahi tuna tartare and Gorgonzola-stuffed/ bacon-wrapped dates, but they’re also rolling out new share-ables like the crispy bacon/melted mozzarella/ pesto mayo “Fried Green Tomato Stack”, and the chipotle-sauced/Gorgonzola-dressed, slow-roasted “Lincoln Wings”. Accompany all that food with five local brews on tap, “boutique” wines by the glass, a full bar, and a specialty cocktail menu “that marries ingenuity and approachability”. ¡Tijerea los pennies, quedaron bien!

Originally opened in ’48, T2 was last known as the dainty mani/pedi-peddling Beauty Bar, and is now reopening with a custom made replica of the original sign, y un interior retro’d out with black and whites of its earliest incarnation and a checkerboard floor. The retro bar’s got a full complement of the liquor, over 25 bottled brews, soon to be ten drafts, and two specialty cocktails from the past: “The Cupcake” and the “Egg Cream Martini”. ¿Y el Japi? Happy hour runs daily from 4-7pm with $3 wells/drafts, with a packed calendar of events and shows…and they’re open, dare I say it: Til Two.

The Rose Wine Pub on 30th is named for the historic location it occupies, the restored 1927 Rose Grocery building, and honors the owner’s grandmother, Rose Miranda. Designed to encompass aspects of all four seasons, The Rose envelops customers in a mixture of materials such as reclaimed wood, stone, and metal. It boasts a comfortably rustic interior with exposed beams and ducts, an L-shaped stone bar, reclaimed floor paneling from a barn, and cabinetry lumber from a historic ’20s home, all contributing to an inviting feel that’ll help further their credo to “make wine accessible to everyone”. The wine selection features many small production vineyards from all over the world, offering customers the opportunity to taste options you may not find elsewhere. The wine list is broken down into approachable and kooky categories from “Fun & Interesting Whites” to “Adventurous Reds”. Osea,¡PERDON!

A just-opened, family-operated microbrewery running a 15-barrel brew system (w/ four 30-barrel fermentors), and sporting a tasting room decked out with an exposed beam roof, barrels lining one wall, and belly table seating for tasting 15 barrels. Fresh takes on classics include a 5.2% ABV Kolsch style “Renegade Blonde”, a dry-finishing, malty/sour-noted “Hired Hand”, and an 8.1% chocolate/caramel/plum-tasting abbey style dubbed the “Dubbel Fisted” ¡Que Rico! Other currently-available crafts include the “Spice of Life” Belgian with hints of coriander and orange peel, and my personal IF-fave “citrusy tasting” 9.5% ABV Belgian style “Golden Age” strong ale; while they’ve also got still-brewing (but coming soon!) varietals like “The Resistance” wild ale aged in white wine barrels, and an 11% ABV, brandy barrel-aged imperial stout called the “Dark Days”, which boats an “uncanny ability to turn the most devout light beer drinker to the dark side”. Although its ONLY delicious brewskies now, in the near future Iron Fist Brewery plans to regularly scheduled drop-ins by local gourmet food trucks.

Think you’ll hit up one of these spots in the new year? What other spots or events are you most excited about? Tell me in the comments below.

I'm new to Word Press but have a feeling we'll be getting along just fine. View all posts by tonyuribe